The Undead! its a comic about...dead things. Also alive people. Also ninjas and monsters and science and magic and Evil Rats. It's especially about evil mechanical rats. This page will serve to explain and provide background for the madness that takes place on the rest of this site. 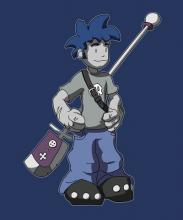 First up, Josh. Josh is tough, the kind of guy you want to have nearby in case of a zombie apocalypse type situation. He's quick, resourceful, and doesn't panic. He'll lead fearlessly and protect his friends.

He's also socially oblivious and comes off as bossy a lot of the time. He doesn't talk much about where he came from, but its obvious hes not from the same place as the college age rabble he runs with.

Josh is some kind of ninja, and seems to make good use of any weapons that are handy. 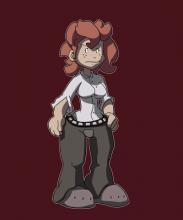 It's that girl! Autumn is looking for shelter from a suddenly hostile world, all while trying to keep her knuckle-headed friends alive. She's gone through a lot and continues to endure with bravery and tenacity.

Her desire to settle down in one place can make her less than adaptable, and though she stays mostly upbeat, she can be sullen when pushed to her limit.

Having not used guns much, her weapon of choice is a polearm. 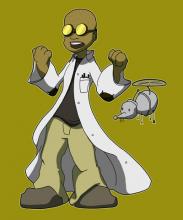 The consummate scientist, Steve has survived using his intelligence, cunning and a boatload of technology. He seems to have inherited a small fortune from relatives, though his past and family aren't things he talks much about. He seeks out victory no matter the personal cost, but his aloof attitude often results in working by himself.

Steve uses devices, robots, gadgets and traps to get out of trouble, though there are hints that he may know a thing or two about hand-to-hand combat. 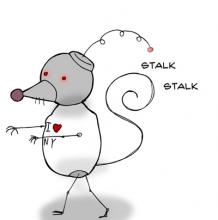 First thing to clear up: this comic is "The Undead" not The Zombies. Dracula, mummy, ghosts and vampires, ghouls and even walking skeletons are all undead. There are probably a bunch of other great examples as well. I love a good zombie story as much as you, but lets face it - In 2012, as I write this, zombies are pretty much everywhere. In fact, zombies were pretty much everywhere in 2004, when I started the comic. In the years since, their popularity has risen to the point that I feel a little bit embarrassed writing a comic that has them in it at all. Talk about an over-done trope, right? In my defense I can only say that I never intended to make the comic about just zombies, its just taken me a long time to get through the zombie part of the story. 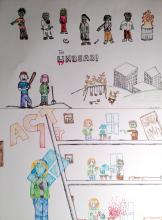 My dad used to have us watch old monster movies every friday night when we were kids. We called it Monster Movie Night, and it was great! From Them! to Angry Red Planet to Universal's original Wolfman, I've seen a good number of black and white movies (my dad has a collection of hundreds of old VHS cassettes in the garage). My siblings and I would watch MST 3000 up in our treehouse and discuss monster films (We were basically a very nerdy version of the cast of Monster Squad).

I'm fascinated with horror, but think there is an amazing amount of great horror work out there. I want to (try to) tell a story that incorporates horror and monsters, but also captures just a little bit of the essence of those black and white monster movies that made them... spooky. Not that I've done that, yet. Its just what I'm aiming for.

In 2004, Shaun of the Dead came out. I loved it (as did a lot of people). I'd been working on and off on an apocalyptic story involving three characters, Tony, Joe and Autumn, but had lost traction with the project. Over the course of a few days, I came up with the idea for a new webcomic, featuring zombies, survival, and humor. 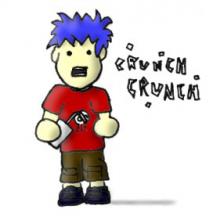 It wasn't very good, or well developed, but I'd been wanting to learn to draw for a while, and this seemed like a good project to start down that path. A few weeks later and the first strip was done. I started posting the strips in 2005, and continued updating through 2010 on a fairly inconsistent schedule. The original format was a color, four panel vertical strip, and attempted to be loosely story driven within the confines of a gag a day strip. Eventually I dropped the strip format and switched to black and white - I like the tone it sets, and it allows me to create comics faster, hopefully helping me to be more story driven.

There's more to tell, but for now I'll leave the story there. This site is a re-launch of the series, and features the first 90 comics re-done in comic page format rather than the original strip format. I've corrected a few small errors and tried to smooth out the continuity. I've also tried to set myself up well with a large queue of comics ready to go, so that I can maintain consistent updates. I'd like to do this webcomic thing the right way this time, and so have put some time into the site and format of everything. If you like what you see, consider giving me a tweet, like or sharing the comic with a friend.

In that spirit, here are some banners to link here with, if you're so inclined: 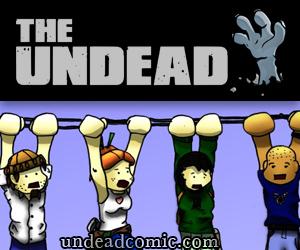